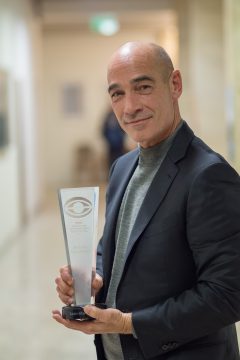 1/ The theme of this year’s Bratislava International Film Festival (the Bratislava IFF) is film acting. How do you see the profession of a film actor today? As an actor and as a director, how do you think it evolves/changes over time?

As a culture the film world is occupied by corporate thought and its product. If it is to survive as a culture, films and the actors and directors involved will have to find a way to resist the homogeneity.

2/ European cinema is still a big topic. What principles or phenomena do you consider characteristic of it?

European cinema can be characterized by the mix in cultures and educations, so different on this continent that can come together to produce an alternative to the Hollywood product.

3/ Not every book is literature, not every film is cinema. What do you think good cinema means?

If a film can make you forget that you are sitting in a dark room and give you a drama so credible that it becomes part of you, that it makes you question your certainties, then it is good cinema.

4/ As you often mention, one of the main topics in your work is freedom – spiritual as well as physical. With every new role, every next collaboration, every new experience, you move ahead and grow. How has this theme evolved in you so far?

Freedom for me is when the work that I do can inspire someone to recognize and resist the oppression in their own life. Finding the courage together to make this a better world.

5/ Journalists often ask you about your cooperation with Luc Besson and Lars von Trier, how they are different and how they approach their work. What has affected you as an artist?

Luc is more involved in big business, franchises – the show. For me Lars takes cinema to more of a metaphysical endeavour. He is not only there to take your money, but actually he offers links to recognize our own humanity.

6/ You visited the Bratislava IFF already in 2012 (when presenting Sexual Chronicles of a French Family). This year you came back to shoot The Cellar and now you are here as the main festival guest and receiving its award. Do you like revisiting old places?

I know Bratislava a little better now after having shot The Cellar. Returning here warms my heart as the city is no longer a stranger. I love returning.

7/ During the festival, you’ll also have your own masterclass. What are you planning to focus on and why?

I will try my best to share what I know. It’s my first masterclass.

8/ How was the shooting of The Cellar? Has it fulfilled your expectations as a European film project?

Working with Igor was fun, the cast and crew were very close and I believe it will be a beautiful European film.

9/ For the festival you’ve selected the film Grain – a strongly visual and meditative work that shows you in a new role. Why did you go with this film and how did you find its shooting?

We shot the film in black and white, in English, in the beautiful geography of Anatolia. The shooting of the movie was difficult, like a physical and spiritual boot camp. The film just won the award for best film at the Tokyo Film Festival. I think it will have a good life.

10/ You often say that you have chosen the status of a “nobody”, a “clown”, rather than that of a celebrity. Your movies are very popular, some to the point of being considered cult films. Is it still the case or is there something that has changed?

With the Internet and VOD, a movie today now has the chance to keep on living after its theatrical and TV release. That makes it exciting because the films don’t die like they used to before VOD.