This French drama takes place in Paris in early 1990s when AIDS had already
claimed thousands of victims. The main character, Nathan, joins the activist
movement ACT UP whose mission is to increase awareness of this disease
and campaign against general public’s indifference, government’s idleness
and pharmaceutical firms’ wheeling and dealing. Here he meets with Sean,
the movement’s leading zealot whose political campaign is simultaneously
a struggle for his own life.
In his latest picture, French screenwriter and director Robin Campillo sensitively
develops a gay story against the background of a political struggle.
The name of the film refers to the average heart rate as the symbol of life
as well as the pulsating house music often played in period dance clubs his
heroes frequent.
“Carried by faultless performances and a heady house music soundtrack,
120 BPM (Beats per Minute) is a poignant and acute reminder of that generation’s
battle against an indifferent society and their relentless celebration of
life,” wrote the Euronews portal. 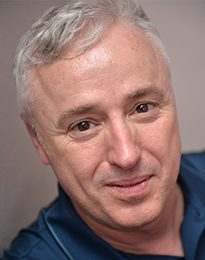 (1962, Mohammédia, Morocco) is a French director who drew attention to himself as co-screenwriter and editor of films by French director Laurent Cantet, for instance his drama The Class (Entre les murs, 2008), which won Golden Palm at the Cannes IFF. His feature-length directorial debut, They Came Back (Les Revenants, 2004), inspired a successful television series of the same name. His second film, Eastern Boys, won the Venice Horizons Award in 2014. For his most recent picture, 120 BPM (Beats per Minute), Campillo received Grand Prix of the Jury along with the FIPRESCI Award at this year’s Cannes IFF.