Carmen & Lola is a story of a romantic relationship between two gypsy teenage girls who are tread upon by society for both their heritage and sexual orientation.
Carmen lives in a gypsy community in the suburbs of Madrid. Like every other woman she has ever met, she is destined to live a life that is repeated generation after generation: getting married and raising as many children as possible. But one day she meets Lola, an uncommon gypsy who dreams about going to university, draws bird graffiti and likes girls. Carmen quickly develops a complicity with Lola and they discover a world that, inevitably, leads them to be rejected by their families.
Being a lesbian and a gypsy means being different and, at the same time, a minority. It’s a lethal pairing. Being a woman is also a struggle. Being a woman and gypsy means you are entrenched in a culture of centuries of patriarchy and chauvinism. Being a woman, gypsy, and a lesbian is a lethal combination. 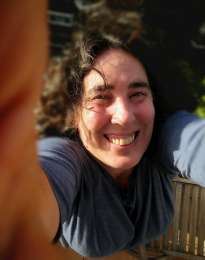 (1968, Bilbao, Spain) is director, screenwriter and film producer. She studied Image Sciences at the Madrid University and film production at the Sidney Community College. Her debut feature film Carmen & Lola (Carmen y Lola, 2018) had a premiere at Directors’ Fortnight of this year’s Cannes IFF.