Contempt is a multi-layered story of love and relationships, a tribute to cinema and an inconspicuous ironic incitement of France. An adaptation of a novel by Alberto Moravia, the film revolves around screenplay writer Paul Javal and his wife Camille. Paul is writing a screenplay for Fritz Lang based on Homer’s Odyssey but their ideas about the story and the film differ. Besides, something has crept into his relation with Camille – a subtle feeling or rather a seed of it – which slowly begins to gnaw away at their love. A tale of France, French culture and “Frenchness”, the entire film is set in French national colours of red, white and blue, sometimes ostentatiously,
with the help of colour filters such as in the opening scene with naked Brigitte Bardot, other times more furtively, through the choice of ambience or decorations. 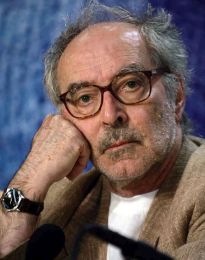 Jean–Luc Godard (1930, Paris, France) has been making innovative motion pictures from the late 1950s until the present day. He was a prominent figure of the generation of post–war Parisian cinèphiles that had been influenced by American (pop–) culture and modernism. His debut, Breathless (À bout de souffle, 1960), is still considered a landmark in the history of cinema due to its unrestrainedness. Evolving hand–in–hand with latest cinema trends, Godard’s early films led the French new wave and gradually turned into militant and political films and essays; in latter stages of his career, he experimented with video and in one of his latest pictures, Goodbye to Language (Adieu au langage, 2014), even with 3D.