Film about a girl, born in the body of a boy, who dreams of becoming a ballerina.
15-year-old Lara has always known that she was born in the wrong body. Having attended mandatory counselling sessions and taking puberty inhibitors for some time, she impatiently waits for the day when she can have the surgery she so desperately wants. She has a strong support system at home, thanks to her progressive single father and loving young brother. But, she still faces great stress at the prestigious dance Academy she attends, where the increasing physical and emotional pressures slowly take their toll. Featuring a truly remarkable central performance from acting and dancing talent Victor Polster in his first screen role, Lukas Dhont’s richly empathetic and beautifully realized film sensitively explores Lara’s complex inner emotions.
The film is multiple award winner at this year’s Cannes festival– including the Camera d’Or for best debut film, the Queer Palm and the Un Certain Regard Best Actor award and FIPRESCI Prize. 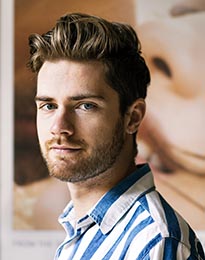 (1991, Belgium) graduated with a diploma in audio-visual arts from the KASK Academy in Ghent. His short films, Headlong (Corps Perdu) and L’Infini, received numerous prizes, namely from the Ghent Film Festival and the Louvain International Short Film Festival. L’Infini also qualified for the Oscars in 2015. Throughout his studies, he focused on fiction but also explored the possibilities offered by the documentary genre. Girl, his first feature fiction film, won several awards in Cannes 2018 and is Belgian entry for the Oscar.