After his mother’s death, Nahuel lives with his stepfather in Buenos Aires.
a violent brawl during a rugby practice gets him expelled from his school
and now, for the first time, he is sent to live with his estranged biological
father, Ernesto, who is a hunting guide in Patagonia. The two of them never
had any actual relationship as it has been more than a decade since they
last saw each other. Nahuel’s rebelliousness and Ernesto’s harshness will
combine to cement a new father-son bond during the hunting season.
At first, their relationship is so fragile that any kind of mishandling could
destroy it. Against the backdrop of the harsh and cold wilderness, Nahuel
and Ernesto must incubate their budding feelings for one another while
struggling to remain emotionally invulnerable and burying their fears of
losing each other. Hunting might just work as an excellent excuse to bring
them together and become the common ritual of mutual maturation. 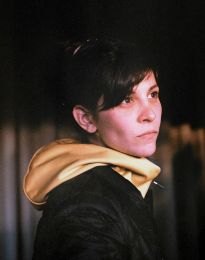 (1982, Buenos Aires, Argentina) is the writer and director of short films, López’s Corner (Rincón de López) and Mares and Parakeets (Yeguas y Cotorras), that premiered during the Critics’ Week at the 2012 Cannes IFF. Sundays (Sunnuntaisin, 2014), a short film she co-wrote and co-directed with Kræsten Kusk, was selected for Directors’ Fortnight at Cannes. Her solo feature directorial debut, Hunting Season was screened as part of the International Critics’ Week at this year’s Venice IFF, winning the SIAE Audience Award.