A riveting feature-length directorial debut by a talented Swedish screenwriter
Amanda Kernell, Sami Blood takes an in-depth inside look at the Sámi
ethnic minority’s life in Sweden and almost physically depicts the darkest
parts of the country’s colonialist history.
The main character of the story is Elle Marja, a 14-year-old Sámi girl whose
family lives off breeding reindeers behind the Arctic Circle in the 1930s.
After she is exposed to ubiquitous racism of the era and subjected to
a humiliating examination at her boarding school, she begins to dream of
a new, different life. But in order to attain it, she must become somebody
else, which means severing all bonds with her family and culture. Besides
the poignantly realistic atmosphere, the film’s impact is amplified by the
impressive performance by Lene Cecilia Sparrok, a debuting young actress
who portrayed the heroine. 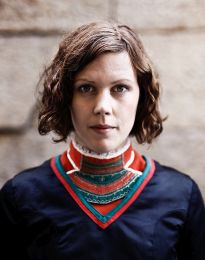 (1986, Umeå, Sweden) has roots in two cultures as she has a Swedish mother and a Sámi father. Since 2006, Kernell has directed several acclaimed shorts for the Direktörn & Fabrikörn production company, including The Holiday Sister (Semestersystern) and Sharing All (Att dela allt). She has studied writing for the stage and audio-visual media at Biskops-Arnö and has completed the Filmpool Nord course entitled “Screenwriting for low-budget feature films”. In 2009, she was accepted by the National Film School of Denmark to its prestigious four-year Film Directing programme.