Rike – 40, a doctor from Europe – embodies a typical Western model of happiness and success. She is educated, confident, determined and committed. We see Rike‘s everyday life, as an emergency doctor, before she fulfils a long-held dream and sails out to sea alone in her sailing boat. Her goal: Ascension Island in the Atlantic Ocean.
The beginning of Rike’s journey is very silent and meditative; there is only her and the vastness of the ocean. It is utterly captivating to watch her take command over her boat and enjoy the solitude, an occasional dip in the dark blue waters and the glorious sunsets.
But her dream holiday is quickly broken off on the high seas. One crisp morning, after a big storm, Rike spots an old fishing boat, overloaded with around hundred people. She quickly realises that the boat, which is full of immigrants from Africa, is sinking and she immediately calls for help. But the coast guard seems hesitant to assist, instructing her to stay away. Rike finds herself in a difficult situation and she is not sure what to do…
Wolfgang Fischer’s film depicts a struggle for survival at sea which makes palpable the cruelty of the situation for people in dire straits whose fate is determined by others. The ocean becomes the scene of an allegorical, existential drama.
Styx is a remarkable film that uses minimal dialogue to tell a very powerful story. 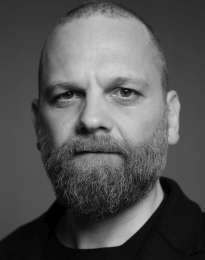 (1970, Vienna, Austria) studied psychology and painting at the University of Vienna as well as film and video at the Kunstakademie Düsseldorf under Nan Hoover. From 1996 to 2001 he took a degree in film and television at the Academy of Media Arts Cologne. In 2002 he attended a course in how to work with actors led by Mark Travis in Poland. In 2005 he received a scriptwriting scholarship for the Munich Screenplay Workshop where he developed the script for his debut film What You Don’t See (Was du nicht siehst).