Shortly after the occupation of Czechoslovakia in 1968, 18-year-old Irena Brežná unwillingly followed her parents to exile. She had to face not only new culture that was inconceivable to her but also remorse that she failed to fight for her homeland. That is why she went on to write about the dissent movement in Eastern Europe and about the Russian invasion to Chechnya. Gradually we discover how she managed to create an inspiring “patchwork identity”, which is geographically situated not only between Switzerland, Germany, France, and Slovakia but reaches out as far as the African continent and Russia. In her homeland called emigration, many languages are spoken and many interesting and diverse people dwell. The film provides unique archival footage and fresh tears and laughter. 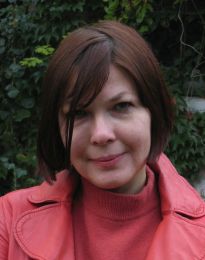 Anna Grusková is a Czecho–Slovak film, theatre and radio author and director. She graduated from Charles University in Prague, majoring in theatre and film studies. As a filmmaker, she has directed documentary films Rabbi Woman (Rabínka, 2012) and Return to the Burning House (Návrat do horiaceho domu, 2014), mapping out the lives of WWII heroines born in Slovakia, Gisi Fleischmann and Haviva Reick, respectively. In 2015 she founded her own production company based in Bratislava.