The White World According to Daliborek

Dalibor is a 37-year-old construction worker with a complicated family
background and an obvious fixation on his mother with whom he shares
a flat in a prefabricated building on a Prostějov housing estate. He hates
the Roma, the Jews, refugees, homosexuals, Angela Merkel and he is by no
means alone in his work and family environment. But above all he hates
his purposeless life. Since he has a peculiar kind of creativity, he lets out
his frustration through primitive horror videos and vulgar songs he shares
online. The serene relationship with his mother is suddenly turned upside
down by an alien, namely her new friend Vladimír. Dalibor’s reaction is
his first serious acquaintance that marks an end to his ostentatious lack of
interest in women and sexual life. The film is a documentary visit of those
fellow citizens who miss Adolf Hitler. “I mean, he is good, he only has dumb
ideas,” his mother says about Dalibor. Unfortunately, the views like his seem
to be around more and more often. 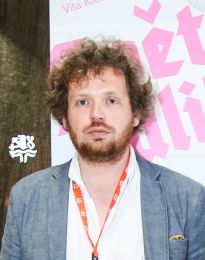