Giulia is a member of the Jehovah’s Witnesses community. She is academically gifted but her education, aspirations and personal relationships are repressed by her family’s rigid habits guided by strict religious beliefs. Suspended in time and built on rigorous and sacred scriptures, Giulia’s ancient world fiercely excludes anyone who doesn’t belong. When she meets Liberto who works in her father’s factory, Giulia finds herself rebelling against the strictures placed upon her. She discovers there may be another destiny awaiting her, one she can choose for herself. Libero’s world is inhabited by those who make mistakes, those who seek other prospects, and those who love unconditionally. What follows is a pure and inevitable love story, which leads to Giulia being completely cut off from the religious world she used to belong to. A tender portrayal of young love at the crossroads, Wordly Girl premiered at the Venice IFF. 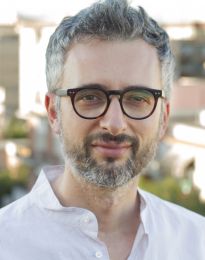 Having worked for some time as an independent filmmaker, Marco Danieli decided to pursue formal education at the Experimental Centre of Cinematography in Rome, which he completed with a degree in directing in 2007. Since 2011 he has been teaching at his alma mater. Worldly Girl is his first feature film.