The 2016 edition of the Bratislava International Film Festival (BIFF) is proud to welcome Rade Šerbedžija, one of the most accomplished Yugoslav actors of all time. A “renaissance man” from Croatia who has made it all the way to Hollywood, Šerbedžija will arrive in Bratislava to receive the Award for Artistic Excellence in World Cinematography and to present his directorial debut, The Liberation of Skopje (Osloboduvanje na Skopje, 2016). 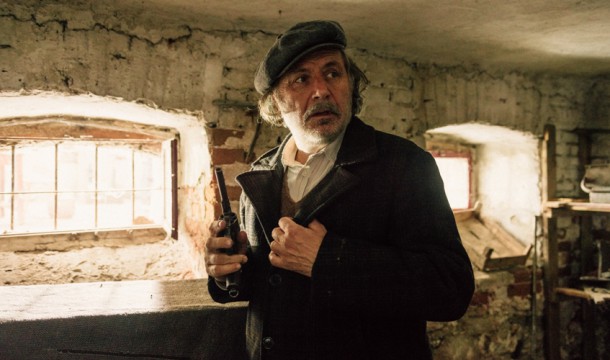 Actor, poet, musician and now debuting director, Rade Šerbedžija has established himself as one of the most distinguished Yugoslav actors of his generation. Shortly upon his graduation from the Academy of Dramatic Arts at the University of Zagreb in 1969, he began to collaborate with leading Balkan theatre and film directors, appearing in over 70 motion pictures, TV series and stage plays. He attained international fame for his performance in Before the Rain (Pred doždot, 1994), a drama about the Bosnian War by Macedonian filmmaker Milcho Manchevski.

Šerbedžija’s exquisite acting and enigmatic appearance later opened the door to his cooperation with acclaimed international directors such as Francesco Rosi, Philip Noyce or John Woo. One of the pinnacles of his international career came in 1999, when he was cast in a hauntingly hysterical supporting role alongside Tom Cruise and Nicole Kidman in Stanley Kubrick’s final film, Eyes Wide Shut. Mr. Šerbedžija will personally present a special screening of this motion picture at this year’s edition of BIFF.

Šerbedžija went on to confirm his acting qualities in a critically-acclaimed drama, Li and the Poet (Io sono Li, 2011), and his international status in a number of lavish Hollywood productions such as Harry Potter and the Deathly Hallows: Part 1 (2010), X-Men: First Class (2011), Mission: Impossible II (2000) or Batman Begins (2005).

Recently, Rade Šerbedžija added another facet to his already multi-artistic personality by making his directorial debut, The Liberation of Skopje (Osloboduvanje na Skopje, 2016), which he co-directed with his son, Danilo. Set in 1942 in Skopje (now the capital of Macedonia) at the time of occupation by German and Bulgarian troops, the story exploring the cruelty, poverty and suffering of war is told through the eyes of Zoran, an eight-year-old boy whose father has joined the partisans while mother has become involved with a German officer.

The Bratislava International Film Festival decided to honour Mr. Šerbedžija’s versatile artistic accomplishments by bestowing upon him the Award for Artistic Excellence in World Cinematography. Mr. Šerbedžija will accept the award at the festival’s opening ceremony before the screening of his debut film, The Liberation of Skopje. In latter stages of the festival, Mr. Šerbedžija’s presence will add a special flair to the Focus section, which is dedicated to contemporary Croatian cinema this year.