The main protagonists of this stark and severe film taking place in the
Canadian tundra near snow-covered Montreal are father and his 12-year-old
daughter (played by actual father and daughter) who live without much
social contact, particularly the daughter who does not even attend school at
the wish of her father who seems to protect her zealously against something
we don’t quite see but it is clear he is obsessed with it. Instead of explaining
some of the mysteries, the film adds more of the same, like a pile of frozen
human bodies in a nearby forest where the daughter goes to play.
Curling is a film about living on the edge of society, both voluntarily and
involuntarily. It revolves around two people who live with a secret and share
it with each other but refuse to speak about it. 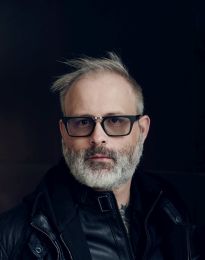 Denis Côté (1973, Perth-Andover, New Brunswick, Canada) has made ten feature-length films, both fiction and documentary, since his debut in 2005. He is a darling particularly at the IFF in Locarno, which has screened five of his films and two of them – All That She Wants (2008) and Curling (2010) – were decorated for best directing. Four of his other films have been presented at Berlinale, including Vic and Flo Saw a Bear, which won the Alfred Bauer Award in 2013 for a “feature film that opens new perspectives on cinematic art”. His latest film so far, A Skin So Soft, premiered this year at Locarno.