His first feature since Honey, which won Berlin Golden Bear in 2010, this is
a bold departure from the intimate tales of contemporary Turkey for which
director Semih Kaplanoğlu’s is best known.
In an undefined near future, Professor Erol Erin lives in a community protected
from multi-ethnic immigrants by magnetic walls. For unknown reasons,
the community’s farms have been devastated by a genetic crisis. Erol learns
about Cemil Akman, a fellow geneticist who wrote a thesis about the looming
crisis affecting genetically modified seeds, and sets out on a journey beyond
the wall to find him, a journey that will change everything Erol knew.
Inspired by a chapter from the Quran and shot in the United States,
Germany and Turkey, this philosophical sci-fi tells a post-apocalyptic story
set in a world where those that survived are divided between the remnants
of cities ruled by corporations and populated by elites and the areas called
Dead Lands where genetically incompatible immigrants suffer from drought
and epidemics. 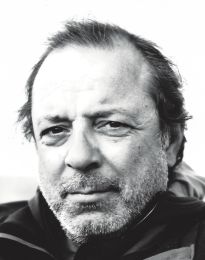 Semih Kaplanoğlu (1963, Izmir, Turkey) is an award-winning film director, producer and screenwriter. His debut feature, Away From Home (Herkes Kendi Evinde, 2001), won Best Director award at the Singapore IFF and his second feature, Angel’s Fall (Meleğin Düşüşü), premiered at the Berlinale Forum in 2005. After that, he embarked on producing and directing the Yusuf Trilogy: Egg (Yumurta, 2007) premiered in Cannes, Milk (Süt, 2008) premiered in Venice and Honey (Bal, 2010) won the Golden Bear Award at Berlinale. Kaplanoğlu is widely regarded as one of the most accomplished and influential directors in Turkish cinema.