They come at night. Everyone steps out of their homes. They light torches and remember those who have walked these streets before them. In the next few hours, the city will be on lockdown as an eclipse appears and meteors start to fall.
Blending documentary filmmaking and political commentary, and connecting the earthly to the cosmos, Meteors is a film about memory and disappearance. Although born from the impulse of concrete events and anchored in the political reality of contemporary Turkey and smouldering civil war with the Kurdish minority, the film manages to exceed this context thanks to bold treatment of the metaphor.
Six formally diverse chapters serve as reconnaissance of the land, animals, people, and finally the sky, which reacts to their actions through fiery signs, all this in contrast black-and-white imagery with acknowledged digital texture – a visual feature of the modern time in an almost timeless film. 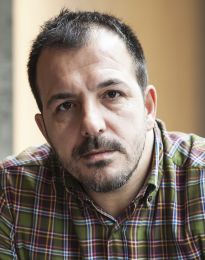 Gürcan Keltek (1973, Izmir, Turkey) graduated in film at Dokuz Eylül University in his hometown. Upon graduation, he directed several documentary shorts including Overtime (2012), which was selected at Visions Du Reel and DOK Leipzig. His medium-length film, Colony (2015), was screened at FIDMarseille and earned him the Best Balkan Newcomer Award at Dokufest. His first fiction feature film, Meteors (2017), premiered at the Concorso Cineasti del presente section of the Locarno IFF.