Ciambra is a ghetto in Southern Italy inhabited by an isolated Romani
community. Its member, 14-year-old Pio, looks up to his older brother who
supports their large family thanks to car thefts and occasional burglaries.
One day he suddenly disappears and Pio tries to fill his shoes, determined
to become a man in an unequal struggle against the local underworld. On
his journey to early maturity he is accompanied by his good friend Ayiva, an
illegal immigrant from Burkina Faso.
Following his feature-length debut, Mediterranea, one of the most talented
contemporary filmmakers Jonas Carpignano made another naturalistic film
in which he again demonstrated his flair for non-actors. Both films form
part of a loose trilogy interconnected through the main characters; the first
follows the story of migrant Ayiva, the second tells the story of his Romani
friend Pio. The director met Pio while making his short film, a Chjána. When
his car with filming equipment got stolen, his friend suggested looking for it
in Ciambra. 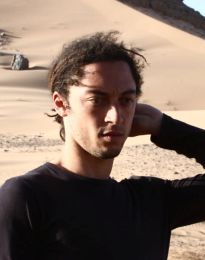 (1984, New York City, New York, USA) spent his childhood shuttling between Rome and New York. He began making films at Wesleyan University and in 2012 he completed the Sundance Screenwriters & Directors Lab. His short film, a Chjàna (2011), was awarded at the Venice IFF and his next short film, Ciambra (2014), won the Discovery Award during the Critics’ Week at the Cannes IFF. After his feature-length debut, Mediterranea (2015), that was part of the Critics’ Week in Cannes and also screened at the Bratislava IFF, he elaborated on the story of boy Pio from Ciambra; the feature-length version premiered at Quinzaine des Réalisateurs in Cannes.