The Chronicles of Melanie

Early morning of June 14, 1941, in Stalin-occupied Latvia: Soviet invaders
break into the home of Melanie and Aleksandrs, journalists working for an
independent Latvian newspaper, and force them to leave everything behind.
At the train station, they get shoved into cattle cars destined for Siberia
along with over 15,000 of their fellow citizens.
In the face of frost, famine and ferocity, Melanie seeks strength only through
writing hundreds of letters to Aleksandrs that never get sent, letters teeming
with hope for a free Latvia and a better tomorrow. For the full 16 years,
Melānija keeps a handwritten family chronicle for her son, Andrejs, as she
herself no longer has hopes of returning to Latvia.
Based on the true life story of Melānija Vanaga, the film is a celebration of
the unyielding human spirit and an agonising account of the greatest tragedy
ever to befall the Latvian nation. The motion picture is Latvia’s official
entry for the Academy Award for the Best Foreign Language Film. 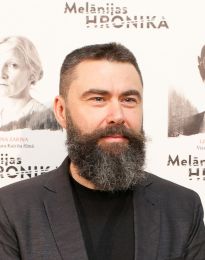 (1971, Riga, Latvia) is an opera, film and theatre director. Since his graduation from the Latvian Academy of Culture, he has established himself as an acclaimed director of operas in Latvia and Germany. Kairišs has directed four documentary and six fiction features. He made his debut in 1998 with a short documentary, The Train. His first feature- -length movie, Leaving by the Way (Pa celam aizejot, 2002), won Latvian National Film Award for the best feature, screened in the official competition of the Karlovy Vary IFF and received an award for the best debut at the Raindance Film Festival.