Three siblings born in Iraqi Kurdistan but raised in Germany return to their
homeland for their mother’s funeral. Her last wish is to be buried next to
their father in their native village but their uncle refuses to grant his sister’s
wish. The siblings therefore decide to steal their mother’s coffin and flee in
a pickup truck through the desolate landscape. During their odyssey, they
are not only confronted with their vast Kurdish family but also with one
another in a drama on severed family relations and the process of rediscovering
one’s own history.
Directress Soleen Yusef, herself a German citizen with roots in the depicted
area, chips in a Kurdish version of infamous historical events as the film
reflects on the massacres of Kurds in Northern Iraq by Saddam Hussein’s
regime in the 1980s. However, as the siblings gradually come to terms with
the past, news reports of ISIS advance and the siege of Mosul point out the
contemporary reality and violence in this politically unstable region. 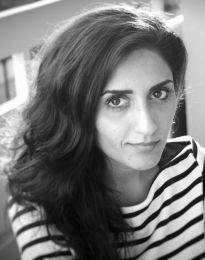 (1987, Duhok, Iraq) was born in Iraqi Kurdistan and came to Germany as a refugee at the age of nine. In 2008 she began to study fiction film directing at the Baden-Wurttemberg Film Academy. Her mid-length film, Trattoria, premiered at the Berlin IFF in 2012. House without Roof is her graduation film, which won Grand Prix Special des Amériques at the Montreal World Film Festival in 2016.