Bobbi Jene Smith dedicated ten years of her life to Batsheva, a world-famous Israeli dance troupe, during which she became one of its stars. Now she is thirty and feels like treading her own path for a while and perhaps making it big in the United States where she was born. She leaves behind not only Ohad Naharin, her mentor, genius choreographer and author of the “gaga” movement language, but also her dance and love partner who is ten years younger and not quite ready to leave his homeland. We become witnesses to a fascinating artistic struggle that requires the strength and courage to cross the borders of one’s own safe zone and eventually the boundaries of dance. “I want to get to that place where i have no strength to hide anything,” says the main protagonist. The power of this stunning lm that seamlessly blends a dance documentary with a love story lies in skilful narration and formal simplicity that brings out the heroine’s talent and openness. 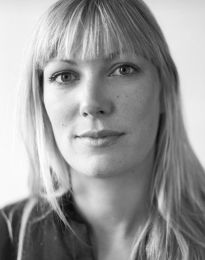 Elvira Lind (1981, Copenhagen, Denmark) graduated from City Varsity in Cape Town in 2006, majoring in documentary filmmaking. Since graduation she has directed and shot various-length documentaries for television, cinema and web on four different continents. Lind’s first feature-length documentary, Songs for Alexis, screened at IDFA in 2014. a year later, she received the CPH:DOX New Ta- lent Award. Her most recent film, Bobbi Jene (2017), was screened at Tribeca Film Festival and Visions du Réel.