The lengthy military conflict of the 1990s in former Yugoslavia left deep
scars in the memory of each belligerent nation. In this intense drama set
two decades after the series of civil wars ended, a group of middle-aged war
veterans from different backgrounds get together in an off-season hotel in
Bosnian mountains for an extended group therapy session, a “reconciliation
course” of sorts that is conducted by a Slovenian psychiatrist, Ivan.
Exploring the ability to forgive others only once we have forgiven ourselves,
the film brings together the crème de la crème of Balkan male actors. While
both acting and cinematography are almost documentary-like for the most
part of the running time, director Alen Drljević chose to work with some of
the region’s best talent rather than non-actors, which really paid off.
Men Don’t Cry won Special Jury Prize at the most recent edition of the
Karlovy Vary IFF. 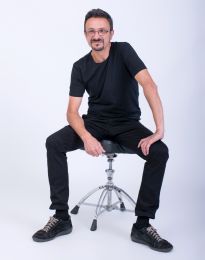 (1968, Sarajevo, Yugoslavia) graduated from the Academy of Performing Arts in Sarajevo. His graduation short film, Paycheck (Prva plata, 2005), was nominated for the European Film Award. He focused his first feature-length documentary, Carnival (Karneval, 2006), on the dramatic events of the 1990s that put former Yugoslavia through a series of civil wars. He has worked on several successful films as assistant director, including three films by Jasmila Źbanić: Grbavica (2006, Golden Bear at the Berlinale), On the Path (2010), and For Those Who Can Tell No Tales (2013). Men Don’t Cry is his fiction debut.