Broke, with nothing but her cat and doors closing in her face, Paula is back
in Paris after some time away. As she meets different people along the way,
there is one thing she knows for sure: she is determined to jumpstart her life
and she will do so with style and panache.
Estranged from her mother and ignored by most of her former friends, Paula
just got a boot from her long-term boyfriend. As irresponsible as she is resourceful,
Paula slowly moves up the social ladder, moving from a temporary
crash pad to a cheap hotel to a modest but acceptable lodging. She has one
blue eye and one brown eye, a trait that makes her involved in one of many
intriguing episodes as she manages to turn a case of mistaken identity into
a job offer.
Set in the Parisian neighborhood of Montparnasse on the Seine’s left bank,
the film was made with a modest budget and an almost entirely female crew. 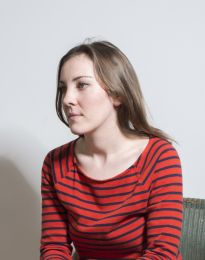 (1985, Venissieux, France) earned a master’s degree in General and Comparative Literature at the Sorbonne University and studied cinema at the National Film School, La Fémis. Her first feature film, Montparnasse Bienvenüe, premiered in Un Certain Regard section of this year’s Cannes IFF, winning the Caméra d’Or award for the best debut of the festival.