On December 31, 1999, Boris Yeltsin announced his resignation as President of the Russian Federation and appointed Vladimir Putin as his successor. Vitaly Mansky was given the task to shoot a made to order film about Putin, and so began a series of interviews with the new president. His position of “official” documentarist gave him a today unimaginable access to Putin, but also to Yeltsin (and after years of silence, Mikhail Gorbachev reappears). Mansky took full advantage of his position and wasn’t afraid to ask even unpleasant question.
Eighteen years later, Mansky cut the material, creating a fascinating portrait of a politic on the rise, a documentary political thriller about three men sharing one country and millions of silent witnesses standing by and watching. 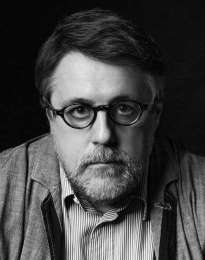 (1963, Lviv, Ukraine) is one of the most prominent Russian and European documentarists of now. He shot more than 30 films, among which Under the Sun (V luchakh solnca, 2015) also appeared in Slovak distribution, and produced many more. Mansky is the founder and director of the documentary film festival Artdocfest.