Durga is the name of a Hindu warrior goddess combating evils and demonic
forces and simultaneously the main character of the film who is on the run
from her home village along with a man. They must get to the nearest railway
station to catch a train out. In the middle of the night, they stop a car
with two small-time gangsters who offer them a ride. The couple get into
the car but the gangsters soon begin to be troublesome rather than helpful.
So begins a road movie through the Indian countryside that is full of fear
and peculiar characters. This formally polished film has no traditional plot
as it is rather about feelings, the power of words and gestures, and about
violence that never gets graphic. a woman named Durga may be worshipped
as a goddess, but what happens when she is suddenly thrown on the street in
the man’s world? Sexy Durga is a disquieting film that gets under your skin. 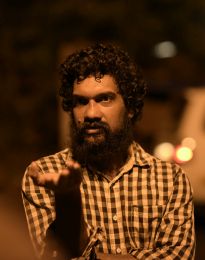 (1977, Perumkadavila, India) completed his studies of zoology at VTM NSS College in Dhanuvachapuram. Upon his post-graduate studies of law, he began to work as a lawyer before drifting toward cinema. In 2001, he founded Kazhcha Film Forum, a crowdfunding platform to support independent filmmaking that also financed his first motion pictures. Sexy Durga is his third feature-length film that won the main award, Hivos Tiger, at the Rotterdam IFF in 2017.