An adaptation of a classic play by Tennessee Williams tells the story of
a woman who is in the process of losing everything, particularly her mental
health. Blanche seeks temporary refuge with her sister Stella and her
husband Stanley, but the initial conflict with Stanley escalates while Blanche
slumps deeper and deeper in her issues.
The role of Stanley Kowalski was the first big role for Marlon Brando who
introduced the so-called method acting to the big screen. Compared to
Vivien Leigh, Kim Hunter and Karl Malden who unlike him won Academy
Awards for their performances, Brando is much more subtle in experiencing
emotions while retaining a strong physical presence. He became the first
star of the Actors Studio and a role model for future generations of actors.
Along with Elia Kazan, Lee Strasberg and others, he launched a revolution in
film acting. 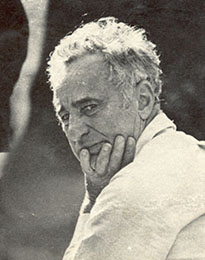 Elia Kazan (1909, Constantinople, Ottoman Empire, now Istanbul, Turkey – 2003, New York City, New York, USA) ranks among the most influential post-war American directors. He was the co-founder of the Actors Studio, which pioneered a new type of film acting, so-called method acting. Besides the Honorary Academy Award, he also won two Academy Awards for directing (Gentleman’s Agreement, On the Waterfront). Before he was awarded the Honorary Golden Berlin Bear, his films scored success not only at Berlinale (Man on a Tightrope) but also in Cannes (East of Eden), Venice (Panic in the Streets, A Streetcar Named Desire and On the Waterfront) or San Sebastian (America America).