The Other Side of Everything

In the parental home of the director Mila Turajlić, there is a door, which has been locked for the past 70 years. After 1945, the spacious apartment was ”forcibly” split by an ordinary key and even after the regime changed, no one turned the key again. Since the director’s ancestors were unusually politically active, the apartment is haunted by the history of the 20th century – and now, in times of great turmoil in the streets, the demonstrations behind its windows can determine Serbia‘s direction in the 21st century.

At these doors and with an occasional glimpse from the window, the filmmaker begins an intimate conversation with her mother Srbijanka Turajlić, a retired professor and prominent political activist against the regime of Slobodan Milosević. The film is a dialogue between two generations, disclosing much about the country’s past and present, about family history and political regimes, about an individual‘s responsibility over the country’s political direction, about Serbia, Yugoslavia and Europe. 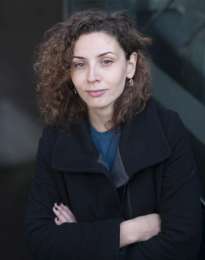 (1979, Belgrade, Serbia) studied political science and film production, and holds a PhD from the University of Westminster. She is a co-founder of Belgrade's Magnificent 7 Festival, which showcases European documentaries. Her feature debut Cinema Komunisto (2010) premiered at IDFA and was included in the Documentary Competition of Bratislava IFF. The Other Side of Everything (Druga strana svega, 2018) is her second feature film.