Skip to content
Mišo Suchý: My Films Emerge from My Inner Need to Get to Grips with Things
Blog

Mišo Suchý is a Slovak-American filmmaker whose retrospective at this year’s edition of the Bratislava film festival was organised in cooperation with the Month of Photography exhibition cycle. His films focus primarily on the issues of family, home, identity, and separation and combine various materials including photographs and home videos.

How did it feel to see all your films one by one?

It was interesting; I have never seen them together as one whole. For instance, the second bloc began with my graduation film we shot in 1987 or 1988 and ended with a film that we are just putting the finishing touches on. I cannot really explain the feeling, but all at once I saw them in a certain context. And another layer of context was added by Pavel Smejkal as he divided the films and put them in sequence. All of a sudden I could see how my films were perceived by somebody else. 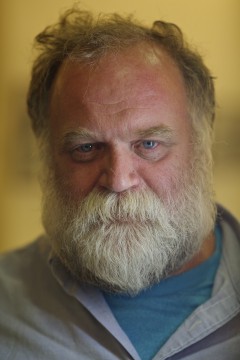 All the films in your retrospective were shot in the span of 27 years but they fit into two projection blocs. Why did you make so few motion pictures?

To me it doesn’t feel they were few; quite the contrary. You see, I don’t earn a living by making films. I believe they emerge from my inner need to get to grips with certain things. These films are not made to order; perhaps they have all been experienced in some ways. I shoot things as they come to me; at the same time, certain things need time. You can begin to shoot many things as they are happening, but if you want to make them into a film, you must have a certain distance. Besides, I am slow by nature.

Your pictures are obviously personal; after all, you yourself called it your inner need to get to grips with things. Does it mean that to you, shooting films represents some kind of continuation of your line of thought?

Let me put it this way. Toward the end of the 1980s when I made the picture about the Roma, I Have Come a Long Way, I learned one thing: certain things that cannot be said directly can be sung about. I had visited one bashavel where people would have fun, play music and enjoy themselves; suddenly a woman appeared and said that she wanted to sing her own song. She sang about how her husband was mistreating her and beating her. It was something that would have been very difficult to speak about, but in this form it was culturally acceptable. She found an acceptable way to testify about these things.

To me, film is the means to speak of my innermost feelings. It is a reflection of sort, pondering a certain situation or feeling. It is a way to deal with something, put it behind you. The element of catharsis has always been important to me, but the catharsis only comes when you truly want to reconcile yourself with something.

In your pictures you often use photographs or home video footage; during the festival I noticed that you took a lot of pictures and videos with your cellular phone. Why is that?

My modus operandi is: do the job with whatever you have. If you don’t have a 35mm camera, get yourself an iPhone or a small camera but always shoot with whatever is close at hand. I’ve got this phone, so I use it to shoot pictures and videos. I am making some sort of a notebook.

When I began to study at the film academy, I had already been a person who took a lot of pictures and expressed himself through them; I called them my sketches. When I wrote the screenplay to I Have Come a Long Way, I had approximately 10 pages of text and a portfolio of photographs that were supposed to express my feelings better.

Naturally, I have a large archive because of this. When we finished editing Home Movie with Marek Šulík, we had some time left so I gave him a whole lot of photographs from Kryvorivnya and I told him: I have a feeling there is something here. These pictures later served as the basis for Pictograph. 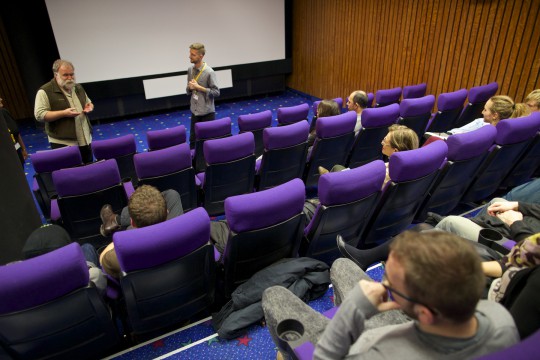 Was this also the case of Home Movie, which comprises primarily home video footage? When you were shooting the videos of your family, did you know you would make them into a film one day?

I Have Come a Long Way had a very precise screenplay and even though we did not always follow it step by step, we basically used it to shoot the picture. The same goes for my other film, About Dogs and People.

Home Movie came to be in a completely different way. I obtained a small grant from the State of New York; I bought a video camera and began to shoot two subjects. As a father, I naturally took footage of my son. At the same time, I knew that I wanted to capture the story of my father-in-law who had fled from Ukraine; I could relate to that in a certain way. And from there it gradually grew on and on. It coincided with the transition from the analogue to the digital when you intuitively shoot and shoot.

I had a bagful of these tapes and I knew there was a film somewhere in the bag. But I was unable to put my finger on it anymore. Then I met with Marek Šulík and I told him what footage I was interested in and believed should be part of the picture, although I did not have any precise idea.

Nevertheless, I did not shoot any particular scene knowing that I needed it for the film. The only scene we shot on purpose during post-production (while Marek Šulík was already editing the film) was the one showing me mowing my lawn. The fact that I was mowing the lawn in my garden was supposed to represent some sort of assimilation with the environment – at least Marek dramaturgically felt it that way. 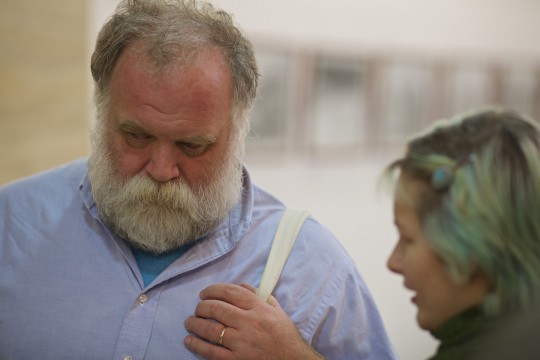 How would you say your work is affected by the fact that you teach at the university?

I believe students are brave. A man is often scared of doing something but when you see that your students simply go and do it…

Well, teaching is fun and it forces me to think. You have to be able to explain things to students as opposed to telling them you like this or you don’t; it just doesn’t work that way. You have to put your train of thought together one way or another.

I like to discuss things with my students, and it is not always films; I am rather interested in what they think and sometimes I have a feeling that I learn more from them than they learn from me. It has even happened several times that some students came for a chat to my office and I began to shoot the conversation. I don’t know why exactly I do it at this point; but one day I might look at the footage and find out.