The 19th edition of the Bratislava International Film Festival will revolve around and explore film acting, emerging stars of the contemporary film scene as well as time proven festival hits. 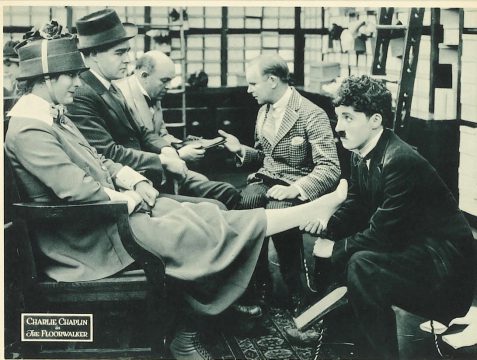 Its Lexicon section will shed some light on the specifics, history and future of acting for film, starting with the perfect acting opposites of silent slapstick comedy – Chaplin and Keaton – and ending with virtual actors in the era of 3D cinema.  The Bratislava IFF will moreover present a number of other notable European films from various prestigious festivals in their exclusive Slovak premieres.

By selection of its dramaturges, the main theme of the 19th edition of the Bratislava Film Festival will be the film actor. Its Lexicon programme section will comprise several films illustrating the history as well as specific challenges that the work of a film actor entails. In the genre of silent slapstick comedy, Charles Chaplin and Buster Keaton are regarded as acting opposites. In the film The Floorwalker (1916), we are following a character who actively moves the plot forward and whose clumsiness serves as a source of various comic situations taking place in a department store. The main character in the film One Week (1920) is, by contrast, a passive and stoic “receiver” of different comic disasters.

In terms of acting work, A Streetcar Named Desire (1951) with the legendary Marlon Brando in its lead role can be considered a breakthrough film due to its application of the so-called method acting principles. When compared to other actors starring in the film, Brando’s acting is noticeably more realistic and complex when dealing with emotions. The adaptation of Tennessee Williams’ theatre classic is a story of a woman struggling to preserve her mental health. Searching for a peaceful haven in the home of her sister Stella and her husband Stanley, she’s unable to find it even there.

The section’s highlights will include a study of a consuming physical and psychological transformation of an actress who gradually merges with her character. The film Kate Plays Christine (2016) is the winner of last year’s Special Jury Prize at the Sundance Film Festival in the category of documentary films. As a filmmaker, Robert Greene systematically explores the concepts of fact and fiction, performance and make-believe in different forms and contexts.

The Lexicon section also comprises accompanying programme, which will, among other things, demonstrate new technologies and working with a virtual actor. One of the top Slovak post-production studios, Studio 727, will present the participants of its masterclass with motion-capture technology and a full-body scan, both a prerequisite for the future of film acting in the era of CGI and 3D films.

Another film, loosely connected with this year’s main theme, is Requiem for Mrs. J. (Rekvijem za gospođu J., 2017), directed by Bojan Vuletić. The actress who plays a blinder is the fantastic Mirjana Karanović. Her character virtually never leaves the screen, remaining present in every scene. This tragicomedy with a successful festival career tells the story of an unemployed widow, meticulously preparing for her suicide. She pays her debts to the neighbours, tries to make peace with her pregnant daughter and submits an order at the stonemason’s. There are just a few more formalities to take care of, but in a country tossed in the midst of a social and economic transformation, not even these simple acts are easy.

In addition to its acting section, the Bratislava International Film Festival will please its visitors with several acclaimed film hits. One of the Slovak premieres to look forward to is a new release of the all-star French director François Ozon called The Double Lover (L ‘ amant double, 2017). Chloé has a crush on her psychologist Paul, but gradually begins to realize that his past hides some truly dark secrets. One of them is the existence of his twin. This erotic film tells the story of the sexual imagination of a young torn woman, toying with the line between fantasy and reality. The film’s complex dual role is played by the Belgian actor Jérémie Renier.

A controversial portrait of one “gentle neo-Nazi”, The White World According to Daliborek (Svět podle Daliborka, 2017), is the work of the acclaimed Czech director Vít Klusák. A soon to be forty-year-old worker and author of amateur horror videos Dalibor K. from Prostějov hates Jews, homosexuals, the Roma people, immigrants and spiders. He has never had an actual relationship with a woman and still lives with his mother Věra. “He’s a good guy, he just has stupid opinions,” says Věra about her son. However, it is opinions just like his that become symptomatic for whole groups of people in today’s society.