Skip to content
Behind the scenes: Nenad Dukić
Blog

The programmer of the Fiction Competition, Nenad Dukić has been with the International Film Festival Bratislava (IFF BA) for six years now. In the following flash interview, he explains what makes a cinema masterpiece and how he works when selecting motion pictures for his own programme section. 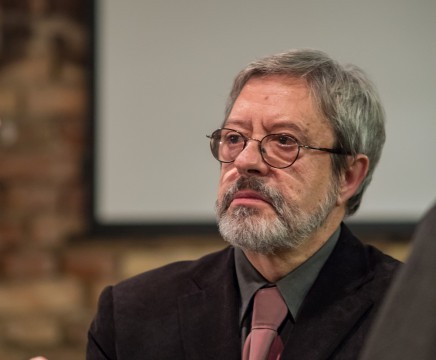 AG: Is there any “recipe”of how to make it to your final selection of competing films? What are your criteria and what are the makings of a good competitive festival film in your opinion?

ND: Just as there is no “recipe” to making films, there is no “recipe” to judging them, no matter whether it is for the purpose of reviewing a film or selecting it for the festival. Therefore, there are no dominant criteria for marking a film as a “good film”. Sometimes it is the form that makes the film a good piece of work; another film may deal with a very strongsubject;yet other times it is the visual aspect that makes the film unique. The combination of all these aspects makes the film a masterpiece. But these days, there are no too many such films.

AG:Do you see any trend –perhaps in terms of themes or topics –that connects recently debuting filmmakers in any way?

AG: Can you describe the process of how you work on your competitive selection?

ND: It is a long process, a process of watching so many films. Basically, my job is to watch and select films from three different sources: leading world film festivals (i.e. Cannes, Venice, Berlin), official and direct submissions to the Bratislava festival and then films from the cataloguesof world sales and distribution
companies. But my selection of films is limited by two things: first, I can’t choose films that have already been shown at any other Slovak film festival; second, we can’t get some films because their producer or distributor have other plans with them or the sales company sometimes asks for such a high festival fee we can’t afford to pay. There’s always a “wish list” and “possible list” of films.

AG: You have been working with BIFF for quite some time. How do you view the changes and innovations that have been made to its structure since you first arrived? Are you happy with them or do you see some space for improvementin the future?

ND: There is always room for future improvements but they always have to do with money, i.e. the festival’s budget. Right now we are doing our best to provide solid program with minimum financial backing, seeking the optimumquality-to-cost ratio. But making a good or a very good festival costs a lot of money.

AG: Is there any film in this year’s competition that you are particularly proud to have?

ND: It wouldn’t be fair to point out one film among the others. Besides, all films in competition have different qualities and it would be very difficult to pick one.