Pause is a film about the power of mental violence in marriage. Middle-aged Elpina is imprisoned in a relationship full of routine. Her husband is by far not interested in taking her needs or living out into account – he is the one making money and “supports” her. However, Elpina is not able to leave him and that is why she escapes into fantasy imagining she has strength for shouting it all out.
This chamber drama with only a few characters is mostly set in one apartment. Outside, the crisis and unemployment make it even more difficult for Elpida to become independent. Dampening expression and powerful acting create film with a cloudy atmosphere that at least for a short time conveys the experience of a mentally abused woman. 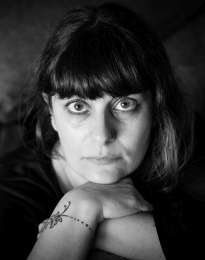 (1973, Famagusta, Cyprus) is a Cypriot director, screenwriter, producer and also one of the film directors of the Cyprus Film Days International Festival. Her short films have been shown in Locarno, Pusan, Sarajevo, or Bristol Encounters. Pause is her feature debut.