Of all the films vying for the Grand Prix in the Competition of Fiction Films, perhaps the most vivid response from the Bratislava audience received Worldly Girl (La Ragazza del mondo) that tells a story of Giulia, a young member of Jehova’s Witnesses community whose strict life and ascetic set of values is suddenly turned upside down after her meeting with a young drug dealer of a symptomatic name, Libero. Director Marco Danieli who attended the festival screening yesterday shared with us some behind-the-scenes information from the making of his first feature-length motion picture. 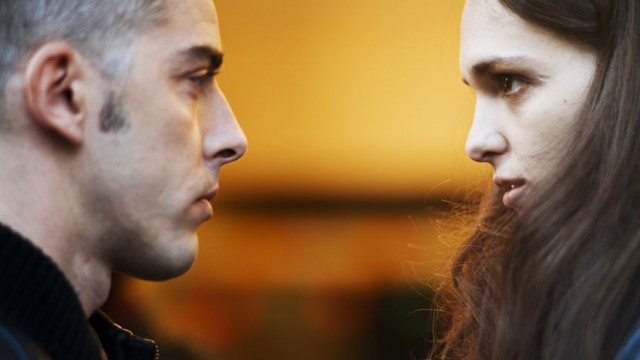 EK: Perhaps the most interesting thing about your film is that nothing in it is black or white. Even when portraying the community of Jehova’s Witnesses, you showed a great deal of sensitivity without even an attempt at ridicule. Did you make any research into similar religious communities? Or have any of the creators had a similar experience?

MD: By no means has it been our goal to demonise Jehova’s Witnesses in any way and I am very glad that you asked me a question like that. We are not journalists to survey any religious community and we definitely did not want to be ideological. In the beginning when we started to write the script for the picture, it came through somehow more grotesque as all protagonists were basically divided into two camps of “good ones” and “bad ones”. It was not until later that we began to strive to add another dimension, so to speak, to individual characters including our heroine as we endowed her with some sort of ambiguity. Previously, I knew precious little about Jehova’s Witnesses, which was just about as much as anybody else. It is important to note that Italy has the largest community of Jehova’s Witnesses in entire Europe. But everything everybody ever seems to know about them is that they go from door to door, ring people’s doorbells and refuse blood transfusion. That is pretty much everything they know. That is why I was immensely intrigued when one female friend of mine told me that she had been a member of Jehova’s Witnesses while growing up. One could say this curiosity was of anthropologic origin. I was particularly interested in that girl’s personal story and specific moments in her life. What I admired the most about her was her courage: the courage to sacrifice her entire world, all of her relationships. If any member decides to leave or is expelled, the reaction of the congregation is very strict. After the community decides to expel you, your friends stop greeting you on the street and even the relations within your own family tend to get very complicated. After I had heard my friend’s story, I began to meet with other people who had a personal insider experience with the Jehova’s Witnesses community. Some of them were still members while others had been expelled. Sometimes we would go and attend their gatherings in their halls of the kingdom.

EK: To a significant degree, the film is based on the intensity of the main protagonists, Giulia and Libero, rendered by Sara Serraiocco and Michele Riondino, and their mutual relationship. How did you find your collaboration with these two actors and what means of expression – that is, besides their superb acting – did you use to elaborate on this tension?

MD: Together with the author of the screenplay, we spent a long time rehearsing with both actors before the shooting. In the process, they even changed some of the lines or came up with their own ones that were subsequently incorporated into the screenplay. At the same time, we got lucky that something very precious happened as there was truly some spark between the two. It did not continue outside the set but during the shooting it was wonderful. As a director, I tried to nurture these favourable circumstances by giving them as much freedom on the set as possible. I tried to avoid forcing them to spend too long in some unnatural lighting or positioning, for instance, as I wanted to let them move around as freely as possible. At the same time, we all strove to view the set as the place of creativity. Although I had everything planned out originally, I didn’t have problems improvising on the spot once we began shooting. For instance, the scene when they kiss for the first time. I arrived to the set where everything had been prepared according to the screenplay – actors, camera, everything. And suddenly I decided it could make the scene a little more special if the camera circled around them on rail all the time. And so we did it. In my opinion, this improvisational approach helped a lot in accommodating the actors.

EK: In an interesting coincidence, your movie arrived in Slovakia at practically the same time as Paolo Sorrentino’s TV series, The Young Pope. I must say I see a lot of parallels between these two representations of the struggle between reason and religion, between personal freedom and tradition. What was your personal motivation to make this film?

MD: I cannot say that I am generally too attracted to religious issues. I was much more interested in the personal story and inner conflict of this concrete girl who at one particular moment suddenly changes from a girl to a mature woman. It is important that the story is taking place against the backdrop of the Jehova’s Witnesses community because the degree of religious freedom in Italy is quite considerable nowadays. There are no great conflicts between generations in the majority society; however, the community of Jehova’s Witnesses still continues to nurture the kind of relations the remainder of society nurtured many years ago. About 20 to 30 years ago, there was still significant political and ideological pressure on young people and strong family traditions that affected them. Today, that pressure is gone. Even the Catholic Church has lost some of its influence as most people have drifted away from religion. That is why I found it so interesting to be able to delve into the Jehova’s Witnesses community. They are completely normal Italians like me or anybody else; the only difference is that they live in a completely different world, a world full of traditions that very strongly determine their lives.